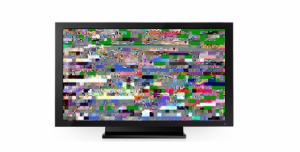 Last week I had a customer call me from Kawana and asked “Can You Fix My TV Reception, The TV Says No Signal?” Their main concern was pixilation. This is where pictures break up constantly and can display a loss of signal message on the TV screen. They asked me if we were capable of troubleshooting and repairing the system which I replied yes. We made a booking and I turned up to the property on Tuesday afternoon to inspect the job.

Upon inspecting their current antenna system we identified that the previous antenna installer had installed an incorrect antenna for this area. Which was a combination UHF/VHF antenna and had also installed a poor quality and cheap booster. Old cable had also been left running from the antenna into the roof space. We also found an old rusty splitter with poor connections on it.

I gave the customer a verbal quote which they accepted and we went ahead with the job. We replaced and upgraded the antenna to a high gain antenna with a high quality masthead amplifier commonly called a booster. Next we ran new cable from the antenna into the roof space. After which we re-terminated all the cable ends & installed a new low loss F type splitter. Tested all TV outlets with good quality digital results.
At completion we retuned all the TV’s for the new digital services, being Local & Brisbane. The customer was very happy. Not only because they were getting all the local channels but also the three Brisbane channels. Seven, Nine and Ten. They had never received these channels before and the picture quality was fantastic!

That same customer called me a week later to express their gratitude for doing such a good job. Letting us know they had not loss TV reception once since we had upgraded the antenna system. They were also very impressed that there was no interruption to their TV reception during the recent bad weather we just had.
In conclusion, It just goes to show, use quality equipment and install it properly and the job will be successful.